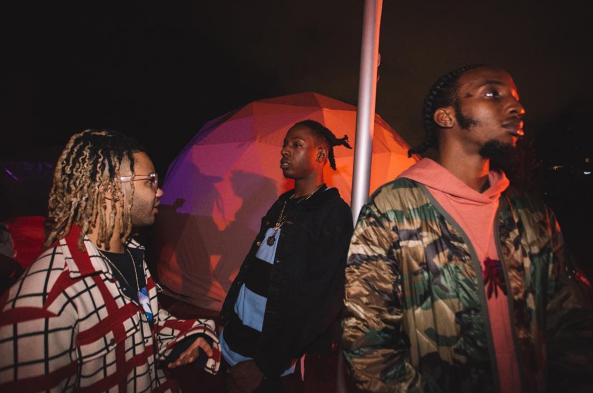 Exclusive: Apparently, it's all for the greater good.

Los Angeles, CA – Like many others such as J. Cole, Ab-Soul, Post Malone, Tech N9ne and more, Pro Era flag CJ Fly dropped his most recent album Fly Trap on 8 December. CJ, like his friend and label mate, Joey Bada$$ is known as a member of Brooklyn, new class of heavy weights, but in this particular album, he sprinkled in some of that towards the Southern seasoning to give everyone the feel of the trap of the royalty.

CJ came through #DXLive where HipHopDX Editor-in-Chief Trent Clark, HipHopDX Features writer, Ural Garrett, Marcel Williams and I got to speak with the 23-year-old on many subjects, including the first and more important why its Kinematics cohort Joey stayed out of the Fly Trap.

"I don't want to make the predictable move," said CJ when Trent asked why the album lacks a Bada$$ feature. "Joey and I have like two or three songs, it's like, we're going to be classics, and then the next time we do [the song] is going to be like, 'Oh, shit'", he added.

"I don't want to keep what they expect. What is going to be the emotion when we doing it again? Because each set me and Joey have are a classic in my opinion."

The joints CJ was referencing are "Sup Preme" and "Hard Blow", but the two recently met for a blistering eight-minute freestyle for Statik Selektah's Shade 45 radio audience.

When the Pro Era squad meets all the love but even so, the rap is a bloodsport, even among friends, and CJ says that although it is friendly, it is still competition when it is time to get out of the cab. "It's a friendly competition, but of course I want to take out your homie if you are doing well. It is like a jump effect. Your friend takes a leap forward, you're like 'Oh, shit! Watch me do this.'" said CJ, who also says that he listens to everything because its competition is the rap as a whole. "I hear all over the world. I am in competition with all the game so I try to be the best."