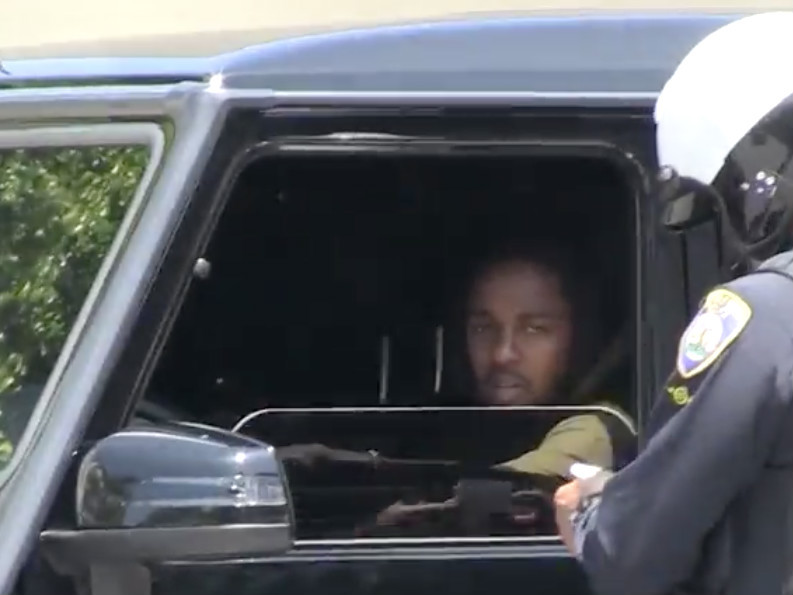 Beverly Hills, CA – Kendrick Lamar apparently played it cool when he was stopped by a Beverly Hills police official on Friday (May 12).

TMZ captured footage of the Compton star in his Mercedes G-Wagon, an officer approached him. Kung Fu Kenny saw the cameras and rolled up the window, but in addition to looking like him, the radio officer that the man's name was Kendrick Duckworth confirmed the rapper's identity.

After being asked by the website why the Damn. the rapper was arrested, the cop's actions was because Kendrick had no plates on their black SUV.

After a brief exchange with the police, the TDE star walked away without a ticket.

Despite the capture of the criticized for his "Good" letters where it says "we hate po-po," and his performance at the BET Awards, where he jumped on a police car, Kendrick recently sat down on the pitch with the commissioner of police of los angeles, Steve Soboroff at a playoff basketball game. After the event, Soboroff explained how he has mutual respect for the Grammy awards, winning artist.

"[Kendrick] is expressed through their art form their feelings, and I respect that, in Los Angeles, and I think he respects — or I hope that is respect — how do we take it seriously the police community and the understanding of the opinions of the people," he said. "We cannot police our way out of these problems. These are issues that have to be assembled for as Maya Angelou says, 'think about what they have in common' ... I think that Kendrick and Jay Z and Rihanna and the lot of the people I've sat next to these games, all of which I have sitting next to doubt, it will be appreciated that and every officer that I know of not too."