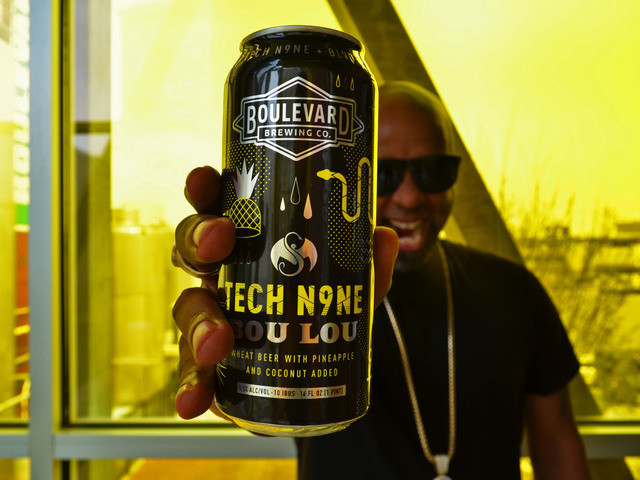 Kansas City, MISSOURI – Kansas City native Tech N9ne and his hometown project of the company, Boulevard brewing, have announced a collaboration on a new beer, which is inspired by their song "Caribou Lou." The Bou Lou, the beer is scheduled to debut on June 15th at Boulevardia annual Kansas City street festival, in the District of Corrales.

The drink is a wheat beer, unfiltered with coconut and pineapple flavor. If the beer sells well, Boulevard could consider the possibility of a wider release, according to its chairman, Jeff Krum

"This is a partnership that had to happen," Krum said in a press release. "Working with the Tech and the Strange Music team has been a true privilege. Their creativity, attention to detail and commitment to excellence is made clear to all of us why they have achieved remarkable and sustained success."

"Kansas City, Boulevard brewing name has always been held in high esteem," Oh'Guin added. "We both strive to create products that put us in the highest echelon of our respective industries, so to be able to collaborate with the Boulevard team on a single project, it is an honor."

The two companies also are collaborating on Bou Lou's packaging and promotion. The beer comes in a large black, decorated with the Strange Music logo.

From the 18 of June of Bou Lou will be available for purchase in four-packs of 16-oz cans in some locations in the Kansas City, Wichita, Lawrence, Springfield and Denver.